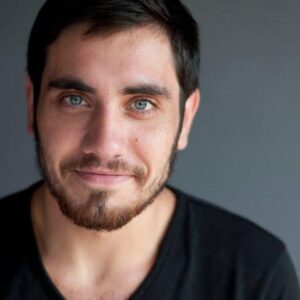 “I was a bad student in school, I just didn’t learn the same way most of the other kids did including my sisters who were all older and had pretty successful high school experiences. Thankfully my parents were educators in the Olean School District and did their best to find a way through for me. BOCES I think had an open house that I attended in 10th grade and I loved Mr. Tomerlin and the Radio/TV program he was running. My Dad had a VHS camcorder while I was growing up and my friends and I would make silly movies so I had an interest even if I didn’t really realize it until that Open House. I honestly didn’t even know that was a program that was available. So that started my journey, I attended the TV/Film program 2006-2007 (my Junior and Senior years). After a few failed college attempts (go to class…it’s important take it from me) I was 22, living in a crap apartment in Allegany working a dead end restaurant job and needed to get serious. It’s hard to imagine that when you’re 17/18 and the world seems consequence free, but it isn’t and life can catch up with you pretty fast. I decided to attend Full Sail University (class of 2010-2012) and got my BA of Science in Film. I knew about Full Sail even back when I was in highschool, Mr. T actually is the one who told me about it. As far as this industry (Narrative Film/TV) and college is concerned it’s not a requirement, I have plenty of very successful peers who never attended university. Full Sail is a private school and can prove expensive, I’ll be paying the loans off most likely into my 40’s but it was worth it for me. College in general is worth it just for the amount of growing and socializing that takes place not even considering the academic gains. Also, if I ever did want to teach or pursue a career change later in life having the BA Degree is important.
After school I moved up to Greenville, SC and stayed with my sister while I tried to find work in the then thriving Charlotte film scene. Through a family connection I got an interview to be an office PA (PA=Production Assistant, it’s the entry level on any show and is not glamorous but is a needed step) for the stunt department on a Cinemax show called Banshee. I landed the job (I later found out I was the only person who showed up with a computer and resume in hand so… yeah). I was lucky enough to be welcomed into that family and stayed on the show from Season 2 through Season 4 (2013-2016). Our industry exists on State Film Incentives and NC decided to end theirs in 2015 so after that last season of Banshee I moved to Atlanta, GA which was then starting to boom with production work. If you decide to pursue a career in Film/TV you will likely have to move to what is called a “Production City” the main ones in the US being: LA, NYC, Atlanta, New Orleans. During the off season on Banshee each year I would try to Produce/Line Producer/UPM and 1st AD any project I could no matter the budget. A little jargon breakdown: Producing can come in many forms but what I focus on is Line Producing which is creating budgets, managing budgets and compliance for state, federal and union laws and regulation. UPM (Unit Production Manager) is more focused on hiring and crew management, managing vendors, compliance with Union regulations and helping the Producers keep an eye on overtime, set safety and things like that. 1st Assistant Directors are in charge of creating the daily shooting schedule, managing the set, the crew and the cast and helping keep things on track for the UPM and Producers. Eventually I got to the point where I was consistently 1st ADing shows or LP/UPMing one or two small budget projects a year so I said goodbye to PA life.
Fast forward another few years and I’m now a DGA 1st AD (Directors Guild of America, it’s the union AD’s and UPM’s fall under) working on various projects here in Atlanta and continuing to LP/UPM one or two projects a year. I’m very proud of my latest UPM gig which was a feature shot in Nashville, TN that just got acquired by Netflix called “A Week Away” coming soon.
You know, looking back on it BOCES and the class I attended there really did pave the way for my success. I learned to be confident in myself and that it’s ok not to learn like everyone else. I learned that there is room for your passion to also be your career in life and that failing is part of the journey as long as you learn from it and keep trying. I will always be grateful for my time spent in that building, that classroom and with educators who went above and beyond to fuel the passions of their students.